It’s interesting to note that the word failure has more than one perspective, although most people have only “ONE” frame of reference.

To fail needs a context of time, and knowing that humans only have a limited lifespan, it’s actually quite possible to fail an endeavour if we were to drop down dead before completion!

That being said, if we keep following our vision, it’s actually quite impossible to fail. For instance, say you wanted to climb Mount Everest. What preparation is needed? 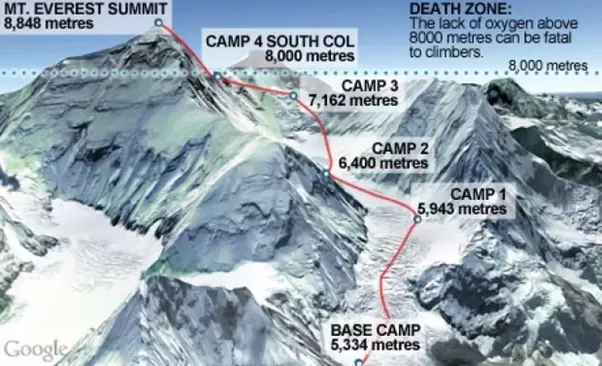 It’s All In The Execution!

There isn’t one famous person that hasn’t had their degree of setbacks,( it’s the best way to learn anything new). For some reason or another, those of us that lack the power of will only give ourselves a limited amount of time to reach certain resolutions. Have you ever noticed how long peoples “New Year Hopes” last?

I say hope because not many say “Will”.

Look at the picture above and note the most efficient route. And then re-read the list. You’ll notice the very first step is to prepare your body for the inevitable hardship that you will endure.

: thus one goes to the stars: such is the way to immortality

It can seem like a battle for most, the seemingly incessant competition. Everyone and their goat trying to ride the bandwagon of profit.

But, here’s a secret, there is only competition if you follow others.

Here on this land, we share with one another (Build upon ourselves) We steer away from the crowd, and grow, step by step, till we reach that summit!

Start At The Start!

I’m sitting here on my own, typing out this post on a land that, at this moment in time is quite barren. No one has commented yet. But for some reason, I’m not deterred, because that would be totally crazy !! And I’m not crazy, AHHHHHH.

The point being every step is followed by another, did you know that when we walk, we are actually falling over, but to stop ourselves we put our foot out and follow that pattern.

So, we’re actually falling over ourselves to get places, trouble is,  we have to know where we want to go. And if we don’t, that first domino is unable to complete its purpose!

its purpose is to use the little energy that is given, in order to perpetuate a motion that “eventually”  cannot be stopped. The power of compounding at its core.

So, in essence, no matter where you start, if you have the tenacity to keep falling over. You’ll get where ever you want to get as long as you’re going in the right direction.

Keep Failing, Or Is That Keep Falling?

There you have it, a new slant on falling, whoops,. I mean failing. How absurd it seems, now we know how it really works and how most folk, given the right knowledge “Will” DO,.and never just “Hope”!

Don’t get me wrong, I love the word, Hope. It reminds me of a comedian (Bob) and makes me laugh when I picture some of the antics he acted out.

But that’s about the only use of the word in my vocabulary, and so should it be for you. To hope for a thing or circumstance is to give up before you start.

Anywho,.. that’s it for now folks

Don’t forget to comment below, and let’s get this ball rolling !!!

This website uses cookies to improve your experience while you navigate through the website. Out of these, the cookies that are categorized as necessary are stored on your browser as they are essential for the working of basic functionalities of the website. We also use third-party cookies that help us analyze and understand how you use this website. These cookies will be stored in your browser only with your consent. You also have the option to opt-out of these cookies. But opting out of some of these cookies may affect your browsing experience.
Necessary Always Enabled

Performance cookies are used to understand and analyze the key performance indexes of the website which helps in delivering a better user experience for the visitors.

Analytical cookies are used to understand how visitors interact with the website. These cookies help provide information on metrics the number of visitors, bounce rate, traffic source, etc.

Advertisement cookies are used to provide visitors with relevant ads and marketing campaigns. These cookies track visitors across websites and collect information to provide customized ads.

Other uncategorized cookies are those that are being analyzed and have not been classified into a category as yet.