The only way to make money online

(Or anywhere), is to “create” perceived value for the exchange of a thing we call money.

There are far too many people chasing the white rabbit (money), and getting confused, lost, overwhelmed and anxious in the bargain. People are also duped into  “Shiny Object” syndrome. It’s an industry standard meaning “A fast Buck”. There are plenty of charlatans hoarding the interspace baying for a chance to induce unsuspecting neophytes. So don’t get suckered in, or do, it’s entirely your choice. The school of hard knocks is a great leveller. 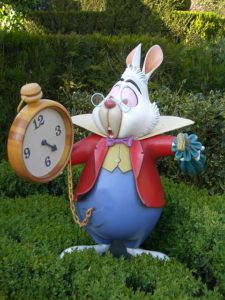 Allow me to share some principles with you about the fair exchange of value, and I promise not to bore you shitless with economics or any of those schools of thought.

For example, if you were thirsty and I had dug a well from which you could drink. It would be in your interests to pay back some of the energy I’ve expended in the dig. And in this case the token we could agree on is “money”.

If you didn’t want to offer a fair exchange, I would decline, and you could go your merry way (thirsty). As I did when digging for the life-giving fluid, and luckily for me, I found it, or I’d be spitting sand!

Some would say, I could ask for more, depending on how desperate you were, and how scarce the water was. But that’s going into EconomTrix. And I said I’m not going there.

This is about “fair” exchange and building trust.

So, now that we’re on the same page let’s begin.

Setting up your stall!

There’s an optimum sequence to any successful process, and it usually starts with the foundations. We’ll use the building analogy, as it’s a common theme in most humans lives, shelter being one of the Maslow’s hierarchies of needs.

First things first, we have to find an architect to help us design a house/platform, from which to discuss ideas and come up with the most appropriate structure allowed in our present climate. (there will be planning permissions and other obstacles to overcome)

Once we’ve established our initial ideas for the project, we’re ready to put the plan into action (the “just do it” ideology is fraught with frustration and burnout), believe me, I’ve been there.

Now we need to find a site, from which to build!

This is where the idea of “manifestation” comes from. There are plenty of gullible people out there, that have been duped into believing if they sit on their arses and meditate, all their dreams will come true. They’re almost right, although the missing part that “gurus” fail to explain is the “ACTION” part!

I’ve built my own house, so I know the effort it takes, physically and mentally to develop an empty piece of land into something quite spectacular. And I didn’t do it by dreaming and not taking action.

There are many platforms out there to help you build your site (I use my secret mentor). Although there is a myriad of great universities on the net, to help you in your endeavours. Okay, when you’ve found your space, you now have actually to build that MoFo!

Getting Your Hands Dirty

Of course, you can get someone else to build on your site for a fee, which depending on your budget, can soon add up. So my advice when starting up, have a go at these things yourself. It’ll pay dividends further up the line, and it’s quite easy albeit time-consuming. I use WordPress for its ease of use and efficiency, although again, there are plenty of platforms from which to choose. 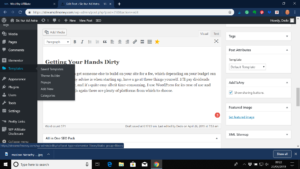 That’s a screenshot of my “backend”, and no it means a behind the scenes look at where I build my site. As you can see, it’s this very post in progress. The best way to learn anything is through constant focus, done incrementally (bit by bit, piece by piece, small bites of the cake, etc.) And in this way, you don’t become overwhelmed.

Any new skill takes persistent action, over and over again, until it becomes behaviourlised (forms a habit) Once that pattern has been formed, you can focus on another goal. Remember, step by step, Rome wasn’t built in a day (I do hate cliches, mental note, don’t do it again)

Setting out Your Stall

So you’ve planned and built your site. The next stage is to either sell it for a quick profit or start inviting friends around so as they can enjoy the fruits of your labour.

And they’ll come back again and again. This will usually lead to a very lasting relationship in which you could visit their site/home and share your dreams and ambitions for the future.

I’ve been sharing my site since January 2019, as you can see by the posts I’ve written, so it’s still in the very early stages of growth. Some people build their sites a lot quicker, having the time to dedicate many more hours than yours truly.

It never ceases to amaze me, the reach we have for the amount of time we invest. This is such a unique time we live in, where things are changing faster by the day, and we can connect from all over the planet and share our stories.

Well, I hope you enjoyed reading that concise explanation on the best way to make money online and learning it’s not about money. It’s about sharing and helping one another solve problems. And by doing that, and if you’re sincere, your friends will be banging down your door, (it might pay to install a bell)?